Control my Prusa 3D printer with a 35$ raspberry pi! 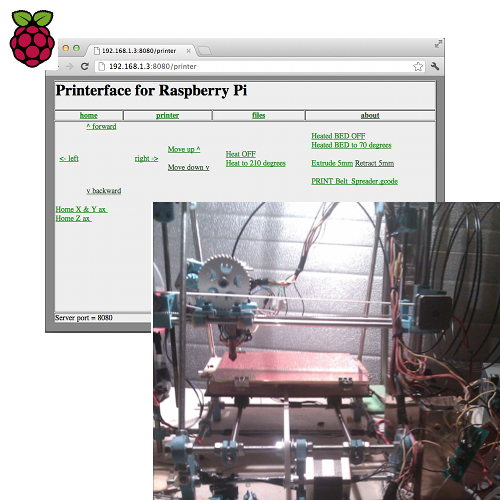 Received my raspberry pi in the mail a few weeks ago. Figured how great it would be to let it control my printer instead of leaving my laptop in the garage all night. A day of hacking later in node.js and I had it up and running. This allowed me to connect a raspberry pi to any 3D printer and then control it from the internet.

Nowadays everyone knows and uses octoprint which is indeed a way more polished and excellent project to do the same thing. However when I created this. It wasn't released yet. So basically I was one of the first people in the world doing this. That's why later on this got featured in wired magazine!

Incidently my nice second black printer is completely printed with the first ugly blue one. Why? Because we can ;) No really it has lots of improvements also, should be easier to maintain etc. What I meant with controlling the printer without a laptop is that since it's just a site I can use my android phone or tablet as well! Even more cool is that on boot the raspberry reports it's ip to a webserver of mine so I can access it from anywhere, more on that in the next vid this weekend ;)

Here's a video with demo of printerface running for the first time:

It's now on github. I changed some things to make it work with pronsole which seems more stable. Still lots of work todo like adding stylesheets:
Printerface on github

I never found the time to work more on the project and also a few weeks after my release octoprint became publicly available. they had spent a lot more time polishing their project and is now the de-facto standard. Highly recommended it features all features of printerface and loads more. Like live gcode viewing, path tool following, webcam support etc.